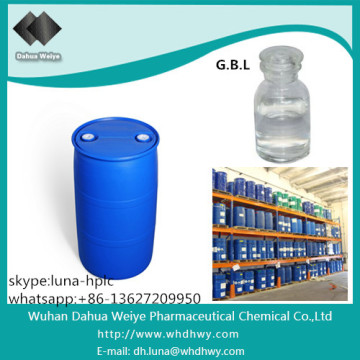 
Transport Package: According to Customer′s Requirements

Application: used as intermediate of indolebutyric acid, and also can be used as industrial dissolvent, diluent or curing agent.

Butyrolactone is a hygroscopic colorless liquid with a weak characteristic odor which is soluble in water. is a common solvent and reagent in chemistry as well as being used as a flavouring, as a cleaning solvent, as a superglue remover, and as a solvent in some wet aluminium electrolytic capacitors. In humans it acts as a prodrug for, and it is used as a recreational intoxicant with effects similar to alcohol.

Butyrolactone has been found in extracts from samples of unadulterated wines.[3] This finding indicates that Butyrolactone is a naturally occurring component in some wines and may be present in similar products. The concentration detected was approximately 5 μg/mL and was easily observed using a simple extraction technique followed by GC/MS analysis. Butyrolactone can be found in cheese flavourings but typically results in a content of 0.0002% Butyrolactone in the final foodstuff.

Under acidic conditions it forms an equilibrium mixture of both compounds. These compounds then may go on to form a polymer. When treated with a non-nucleophilic base, like lithium diisopropylamide, Butyrolactone can become an alpha-carbon nucleophile. The related compound caprolactone can be used to make a polyester in this manner.

Butyrolactone is not active in its own right; its mechanism of action stems from its identity as a prodrug of .

Properties: Butyrolactone is a non-toxic transparent liquid in the shape of oil. It can be mixed with water and dissolved by ethanol ether, benzene and acetone. It can dissolve many other organic and inorganic compound. Using Butyrolactone is very safe and convenient, because it is a liquid with high boiling, powerful solvency, good electrical and stability properties.

2) used as anaesthetic and tranquilizer, used to produce ciprofloxacin and interferon, as the intermediate of vitamin and rolicyprine;

4) Used in battery, capacitor and development of color film.

Butyrolactone is an important organic chemical raw material, which is widely used in the pharmaceutical, pesticide, petrochemical and other industries.

1 ) It can be used to synthesize pyrrolidone products;

2 ) It can be used as a pharmaceutical intermediate, such as Cyclopropylamine and vitamin;

3 ) It can be used as a pesticide intermediate, such as herbicide and plant growth regulator;

4 ) It can be used for alkenes, alkynes extraction agent, absorbent and dispersing agent;

5 ) It can be used to synthesize resin as an antioxidant, plasticizer, dispersing agent, fixing agent and solvent;

6 ) It can be used to synthesize fiber spinning solvent, coagulant, dyeing assistant and antistatic agent;

7 ) It can be used as a raw material of color film former, electrolyte, capacitor and ink lubricant.

Butyrolactone is depressant used for its euphoric and sleep inducing effects.

Butyrolactoneand B-D-O have many industrial and commercial uses. One significant use of Butyrolactone is an intermediate in the manufacture of pyrrolidones, which are widely used industrial chemicals. A second significant use of Butyrolactone, because of its strong solvency properties, is in applications such as circuit board cleaning in electronics and high technology industries, and paint stripping. Other applications include the production of herbicides and as a processing aid in the production of pharmaceuticals. B-D-O is used as an


Contact us if you need more details on Butyrolactone. We are ready to answer your questions on packaging, logistics, certification or any other aspects about Chemical Factory、Benzoic Acid Factory. If these products fail to match your need, please contact us and we would like to provide relevant information.